For all inspections of GP practices from April 2018, we will only rate the six population groups against the effective and responsive key questions, and will aggregate these to an overall rating for each population group.

This means that after we inspect your practice, your new ratings will not include all previous ratings for the population groups for the safe, caring and well-led key questions.

For each GP practice that we inspect, we will rate at four levels.

Level 1: Rate every population group for the effective and responsive key questions.

Inspectors will consider both:

Level 3: A rating for each key question. For the effective and responsive key questions, this is aggregated from the ratings at Level 1. For the safe, caring and well-led key questions, there are no Level 1 ratings, so the rating is based on the evidence we have for the practice as a whole.

Level 4: An aggregated overall rating for the practice as a whole.

The following example shows how the four levels work together. 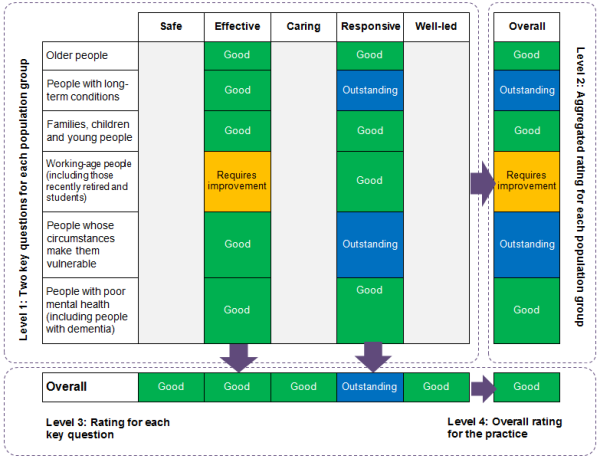 Sometimes, we won’t be able to award a rating. This could be because:

In these cases, we will use the term ‘inspected but not rated’.

We may also suspend a rating at any level. For example, we may have identified significant concerns which, after reviewing but before a full assessment, lead us to re-consider our previous rating. In this case, we would suspend our rating and then investigate the concerns.

This page is for:

How we monitor, inspect and regulate NHS GP practices

6 February 2020
How does technology help you stay in touch or help with care?
4 February 2020
Statement in response to the Paterson Inquiry report
24 January 2020
CQC statement on duplicate material in inspection reports