We've published a new report, ‘Better Care In My Hands’, which looks at how people are being involved in their own care. 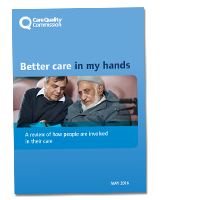 People’s right to being involved in their own care is enshrined in law in the fundamental standards of care. It is an essential part of person-centred care and leads to better and often more cost effective outcomes.

The report is based on analysis of CQC’s national and thematic reports, such as State of Care, its inspection findings and on its NHS patient surveys. It sets out what enables people’s involvement in their own care and provides examples of good practice, as identified by CQC inspectors.

The reports key conclusions include:

This report is timely because as health and social care services reconfigure to adapt to the changing needs of their populations there is an opportunity to make sure person centred care becomes a reality for more people.

Find out more about Better care in my hands, including the review's key findings, recommendations and data.

'Better care in my hands' – our review of how people are involved in their own care.