People detained under the Mental Health Act are still experiencing wide variations in the standard of care they receive, according to our new report published today. 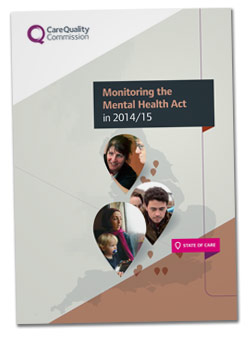 The report, called Monitoring the Mental Health Act in 2014/15, looks at the 1,292 visits we carried our between April 2014 and March 2015 to check how people detained under the Act are treated.

During our visits, we found examples where staff lacked sufficient knowledge of the Act's revised Code of Practice which sets out how professionals should carry out their roles to make sure people detained under the Act get high quality care. We found that staff had received no training on the revised Code in just over 50% of the wards we visited in September and October 2015. We also found no evidence of patient involvement or in patients’ views being considered in a quarter of the 3,836 care plans that we examined during our visits to hospitals.

This means that some people are having their liberty unnecessarily restricted and are not being properly involved in their care.

"Although we have seen some good and caring practice in mental health facilities, we remain concerned that services are not ensuring staff understand the Act or how they can ensure people are fully involved in decisions about their care. This is about more than a person simply having a right to know what is happening to them. Failure to engage a person fully in their treatment can hinder their recovery, and lead to potential breaches in meeting their human rights."

Read the Monitoring the Mental Health Act in 2014/15 report.

See an infographic showing key findings from the report.

Autistic people and people with a learning disability